Two things recently have made me think about that important piece of LGBT history, the ‘de-classification’ of homosexuality as a mental illness in 1973.  The first is the news, released this week, that the fifth edition of the ‘Bible’ of psychiatric illness, the Diagnostic and Statistical Manual, will be published in Spring of 2013.  The second was the election, and the two are related.

In the November election, LGBT people made up 5% of voters – enough to make the difference. And it showed. The election results were almost unimaginable for someone like me who came out in the mid-70’s. The gay Congresspeople, the lesbian Senator, the four Marriage Equality ballot initiatives that won – I still have to pinch myself.  So it made me reflect on the progress of the ‘gay agenda’ since the ’70’s.

Many LGBT people don’t fully understand the critical role that the political action against the mental health community played a in advancing lesbian and gay rights. Soon after the Stonewall Rebellion of 1969, the new gay activist movement took on the task of getting homosexuality removed from the psychiatric ‘Bible,’ the Diagnostic and Statistical Manual of mental disorders (DSM). Before 1973, if you were gay, you were automatically ‘mentally ill,’ and that implied you were emotionally stunted, prone to other mental disorders- mentally disabled. Homosexuality was considered a ‘treatable’ disorder, something caused by bad parenting. ‘Sick’ gay people were encouraged to devote themselves to treatment in the hopes of a cure. (Sound familiar? The Christian Right still believes this.) 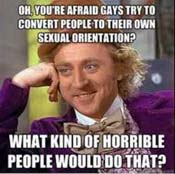 The diagnosis enabled horribly cruel psychotherapy ‘treatments.’ People were committed to mental institutions against their will, subject to aversion therapy – electrical shocks- or years of treatment where they were considered sick and in need  of controlling their ‘perverted’ impulses to love. And it justified discrimination of every form. The diagnosis, along with the sodomy laws that still existed in most states, insured that gay people would have to live in the shadows of normal life.

And so just like Marriage Equality is one of the key LGBT rights issues of the 21stCentury, gay activists made removal of homosexuality from the DSM a major target of political action right after Stonewall. They succeeded in 1973 through a combination of direct action and persuasion of the more liberal members of psychiatry. One of the problems activists had was that gay psychiatrists and therapists were for the most part themselves afraid of ‘coming out’ for fear of being drummed out of their profession. One psychiatrist testified at hearings held by the APA wearing a wig and mask, John Fryer, known then only as “Dr. H. Anonymous.” 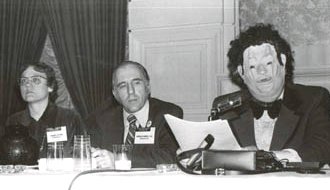 Most queer historians agree that the psychiatric de-classification of homosexuality was a pivotal moment for gay rights. Although psychiatrists didn’t mean it this way, the public generally interpreted the action to mean that doctors were saying that homosexuality was ‘normal.’ While it has taken decades for this to become a true majority mainstream belief, it lay the ground work for anti-discrimination legislation.

It did lots of other things, too, one of which was to transform my field. As the attitude towards homosexuality changed slowly, some mental health practicioners felt emboldened to ‘come out’ themselves and to dedicate their practices to working with other lesbians and gays. We worked with our clients to help restore the self-esteem that had been battered down by decades of being marginalized – we developed ‘gay affirmative psychotherapy.’ We addressed issues special to the LGBT community, we educated non-gay clinicians, and we advocated the idea that the higher rates of depression, suicidality, and drug and alcohol abuse in the LGBT community were caused by discrimination, not anything intrinsic to being gay. Some of us went into research and developed studies showing that gay people are not harmful to children and in fact are just as good at parenting as non-gays.

So reforming the mental health field has been very important to gay politics – and in turn, gay political successes improve mental health among LGBT people, as they gradually reduce the amount of ‘minority stress’ we experience, stress that can trigger emotional disturbance.

And because of the actions of our gay activist forebears, I can write this blog as an openly queer psychologist and sex therapist – and write about the special mental health and sexuality issues of the LGBTQ community.  The fight rears its ugly head from time to time, most notably in the fights about so-called ‘reparative’ therapy.  The proponents of this therapy claim – surprise! – that homosexuality is a mental illness caused by bad parenting.

And today, the same wars against psychiatry are being waged by transgender people and other sexual minorities.  Just as it did for gay people, being considered ‘mentally ill’ has held back rights for other people with non-heteronormative sex and gender expression.  And just as gay people did, trans people and others have fought with psychiatry, sometimes  vocally with demonstrations, placards, and loud voices.  As a result, the DSM 5 incorporates some changes in the right direction.  Transgender people are not ‘auitomatically’ considered mentally ill – only if they are ‘dysphoric’ about their gender.  And people in the BDSM community are not ‘ill’ unless they are unhappy with their sexuality.

There is still more to be done.  But we have the model- the actions that preceded, and the change that followed, the DSM decision of 1973.