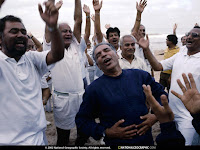 “Laugh at your own suffering, and weep for the grief of others.”
— Thakur

“The deeper that sorrow carves into our being, the more joy we can contain.”
— Kahlil Ghibran

“I’m nobody, who are you? Are you nobody too?
Good, then there’s a pair of us, don’t tell,
they’ll banish us, you know.”
— Emily Dickinson

“No matter what our afflictions, we are meant by the Absolute Oneness that is God to laugh, to sing, to dance, these are the highest and purest forms of prayer.”
—  Rabbi Baal Shem Tov

“Think of the suffering of others, picturing vividly in your mind their sorrows and anxieties, so to awaken a deep compassion for them in your soul, and to help relieve their suffering.”
— Buddha

“Tell me about it if it’s something human. Let me into our grief.”
— Robert Frost

“And like a laughing string, on which mad fingers play,
within a place of stone, be secret and exult, because,
of all things known, that is most difficult.”
— W.B. Yeats, To A Friend Whose Work Has Come To Nothing

“The weak and wounded have a secret power to touch us, and if we open our hearts to them, we become more human.”
— Jean Vanier, founder of the Arche Communities, “little places where love is possible.”

Laughing at my own suffering, and weeping for the grief of others is without doubt the meditation practice I most wish to escape. However, I deeply believe in the benefits this meditation has bestowed on me and will continue to bestow, in many mysterious ways, but most patently—and unpredictably– in my often overflowing daily joy-juice container.

I don’t know why it took me forty years of the daily meditation taught by a profoundly loving and giving Hindu existentialist called Thakur, before I took seriously his recommended practice of laughing at our own suffering, and weeping for the grief of others. From all whom I talked with on our visit to India, Thakur, who died before my wife and I visited India, never turned anyone away, never kicked anyone out, and lovingly provided food, shelter and practical ideas for living skillfully and joyfully.

I have been practicing the meditation taught by Thakur to Ray Hauserman, an American from Ohio, who lived and worked with Thakur from 1945 until Thakur’s passing in 1969. Returning to America, Ray transformed my life, my wife’s life, and the lives of a number of other individuals, and we all began sharing our use of Thakur’s existential practices thirty and forty years ago.

At a recent meeting of our small but inspiring ‘satsang’, what Thakur called a ‘Community of Lovers of Existence’, it was fascinating to me, when I spoke about my daily practise of ‘ laugh at your own suffering, and weep for the grief of others’, that none of my totally trusted and admired spiritual friends thought it possible to laugh at whatever pain one might be feeling at the moment. None of them thought such a practice might be worthwhile, and a few questioned whether it can be healthy to invite into oneself the suffering of others and weep for them.

To me, the practice of feeling my own pain, and laughing out loud at that pain, as well as feeling my way into the suffering of others, and weeping for them,has become one of the most powerful, energizing and rewarding things I include in my morning menu of activities which create for me a wellspring of joy.

How does it work? Laughing at my own exhaustion, my own sorrows, my own anxieties, my own regrets and guilt, not only most often evaporates the toxic feelings, but also puts me into the position of a spectator, watching the drama-comedy of my mind and body and world, enabling me more and more often to dwell in pure awareness, pure being.

Moreover, such a practice—what Ayya Khema called, “Being Nobody, Going Nowhere”, and Thich Nhat Hanh called the heavenly Nirvana feeling of “emptiness, signlessness, aimlessness”, and what Krishnamurti pointed out as the joy of “choiceless awareness” in which one simply observes non-judgementally the coming and going of signals from one’s body and one’s mind and the immediate, surrounding world, thus releasing any identification or attachment to emotions, memories, mental constructions, thoughts, physical sensations —such a practice brings with it not only profound compassion for others, but a flood of delight at rejoicing in the joy of others, in other words, being everybody, going everywhere.

When I experience the suffering of others as my own, I often weep and sob with my entire body, but never in a toxic way, and when I feel the joy of others as my own, that joy seems in some ways far more real and liberating than the satisfactions and pleasures I experience when I am praised, when I gain material things I’ve longed for, when I find success and comfort.

But I must admit that sometimes I long to flee from Thakur’s practice, which I believe was also the practice of Rabbi Jesus and the Buddha, and all those in every spiritual tradition who have studied how the mind and the body and the world interact. I yearn to escape that practice when the mountain of sorrows in the world looks to my ego as if I will be hopelessly and forever enmired.

That ego fear kicked in most recently when my mind stirred up thoughts about a blind, aged, hungry, homeless beggar lying prone on the road, holding his head in pain—a photo of him I’ve kept in my kitchen to remind me of the suffering of others—and it momentarily scared the crap out of me to think of myself in such a situation, no way out, no way to find peace. What could anyone possibly do to relieve so much hopelessness?

On the heels of that hopelessness came the memory of my brother-in-law, Bob Imbrie, who, in spite of terrible physical suffering (PTSD from being badly burned in the most savage no-quarter fighting against the Japanese in New Guinea, and later in civilian life a blow to his head that caused severe and intermittent life-long pain) was able to use the practices he had built up over decades to create inner joy, a joy so powerful that he almost never failed to love and create, despite the searing pain.